Listen to Calum's Road
Borealis Guitar Duo is Art Edelstein and Michael Fullerton. We play music from the Celtic Lands with forays into American, Scandinavian and Klezmer music. We are available for bookings for weddings, special occasions, small concerts in New England. Borealis' unique style is formed by two fingerstyle guitarists playing in different tunings enhancing the harmonic potentiality of fine acoustic guitars.
We can be reached @ 802-552-7954 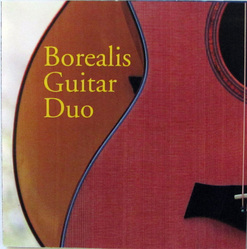 Our first CD contains 17 melodies from Celtic Traditions
Comments on the CD from San Francisco based guitarist Steve Baughman: It's really, really nice.  I am also getting some repertoire ideas, maybe I'll steal 'em.   I think y'all should sell loads of 'em once people get to hear it. It makes great listening on cold Vermont winter nights.
By El McMeen (Well Known Celtic Fingerstyle Guitarist): "If you want music that exudes the atmosphere of playing in your living room with friends, or at a club where the atmosphere is convivial and the drinks legal, then purchase and enjoy this CD.”

By Robert Resnik - Seven Days
"Edelstein and Fullerton are meticulous guitarists and have chosen to record their snazzy instruments with a minimum of reverb and no additional accompaniment, so the glorious sound of the guitars is unfiltered....Some of the most popular and common songs in the genre have been included — such as “George Brabazon” and “Sheebeg Sheemore.” But there’s enough variety on the musical menu that this is not just a collection of pretty, familiar music."